When a friend recently asked me to compile a list of my favorite books, I’m sure she had no idea the list would be so long. And neither did I. I thought I’d come up with 10-15 books, maybe 20 that could be considered my tops. But oh, was I wrong. I got out pen and paper (yes, some of us still use yellow legal pads) and started brainstorming. I recorded every book that I remembered loving as an adult, for one reason or another. I wrote and wrote and wrote and before I knew it, there was no blank space left on the page. 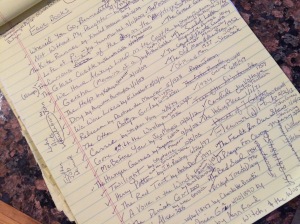 As I looked back over my list, I saw a little bit of almost everything. Some of the books that I’d recorded were considered literary masterpieces while others were not. They ran the gamut from young adult to memoir to fantasy to classics. There was humor and horror and romance. Some were contemporary, others historical. Some made me feel happy while others made me sad. Some just made me feel weird. But the common thread that ran through all the books I loved was that each one made me feel something very deeply. In short, they made an impact on me.

Naturally, if you compiled your own list, it would look very different from mine. Yours might be filled with non-fiction, mine is not. Yours might include Shakespeare and Tolstoy and Proust. Mine does not. Yours would reflect your own personality and be unique to you. And so is mine. So take this list for what it is: one person’s opinion about a number of fabulous books that have enriched my life and might, in some way, enrich yours.

By the way, one of the books on this list is the book that is solely responsible for turning me into a reader. If you can guess which one, I’ll have Amazon mail you a free book of your choice (May I suggest an enthralling family drama, The Weight of Lies, by my sister Emily Carpenter, coming out June 6, 2017.  The Weight of Lies: A Novel ). But I’m pretty sure you’ll never figure it out.

So, here’s my current list of favorites, beginning with the most recently published. I do reserve the right to make amendments going forward, because the minute I press publish, I’m certain I’ll think of five books I’ve left out. And if you are a reader or a wannabe reader, please download the free and fabulous Goodreads App on your phone and use it to determine which books are right for you. I hope this gives you some intriguing ideas, and will inspire you to, as they say, #keepreading.

The Fault In Our Stars by John Green 2012

The Help by Kathryn Stockett 2009

The Hunger Games by Suzanne Collins 2008

Snowflower and the Secret Fan by Lisa See 2005

The Glass Castle by Jeannette Walls 2005

The Kite Runner by Khaled Hosseini 2003

The Other Boleyn Girl by Philippa Gregory 2001

The Danish Girl by David Ebershoff 2000

The Poisonwood Bible by Barbara Kingsolver 1998

The Red Tent by Anita Diamant 1997

Memoirs of a Geisha by Arthur Golden 1997

Harry Potter and the Sorcerer’s Stone by J.K. Rowling 1997

A Voice in the Wind by Francine Rivers 1993

A Prayer For Owen Meany by John Irving 1989

Not Without My Daughter by Betty Mahmoody 1987

We Have Always Lived in the Castle by Shirley Jackson 1962

A Clockwork Orange by Anthony Burgess 1962

Where The Red Fern Grows by Wilson Rawls 1961

The Bad Seed by William March 1954

The Old Man and the Sea by Ernest Hemingway 1952

Of Mice and Men by John Steinbeck 1937

Gone with the Wind by Margaret Mitchell 1936

The Picture of Dorian Gray by Oscar Wilde1890

The Scarlett Letter by Nathaniel Hawthorne 1850

The Count of Monte Cristo by Alexandre Dumas 1844

6 thoughts on “These Are A Few Of My Favorite Reads”