It’s been a year since it happened.
And it’s taken a year for me to apologize.

It was the beginning of last summer, Memorial Day weekend, and I was at Lake Martin, near Auburn, Alabama, probably my favorite place on earth. This is where my family goes to slow down, catch up, and put a flame to that green egg. We’ve been lake people for fifteen years and it feels like home. But one year ago, something curious happened while we were there.

Allow me to back up. Ten years ago, my youngest son asked for a dog. I was not surprised, all little boys want a puppy, don’t they? No worries, I thought, I knew how to handle this. He was my third son and I was an expert on boys. We’d get a fish or a turtle or a hermit crab and all would be well. I was strong. I could say no, or so I thought. But I thought wrong. I couldn’t resist this time, and I couldn’t resist this son. He was convinced, he was persistent, and he was perfectly relentless—he still is, by the way–and he wore me down like an old tire.  He won.

Let me tell you about Leelee. She was a nine-year-old (my husband says she was eight, but that’s not important) miniature schnauzer. At eleven pounds, eight inches tall, she wasn’t the cutest dog ever (yes, schnauzers are the ones with the beard/mustache combo), or the smartest dog ever (sit and shake-yes, rollover-not on your life), but we thought she was the best dog ever. She was a tiny, black ball of soft, furry love.

Leelee was a survivor.

She lived in five different houses with us-we’ve moved an awful lot-and somehow survived the doggy perils that came with each. She survived the ground-shaking wrestling matches of three small boys and one large dad. She survived falling off a Sea-Doo before she could swim. She survived Dobermans and German Shepherds and a Rottweiler. She survived a face-to-face confrontation with a snake, thanks to my uncle in Mobile. She survived the ALLIGATORS IN DOG RIVER (also in Mobile), and most recently, she survived the COYOTES THAT LURK AROUND THE CHATTAHOOCHEE. And her good fortune was not because I was a good doggy mom. I probably was not. But I always made sure my cellphone number was attached to her person in case of emergency. That’s something, right? So you see, Leelee was a survivor. She was a soft bundle of needy love who somehow, for nine years (eight?) trotted away from danger unconcerned and unscathed. All she required was food, a round bed, and love. And that was what she got.

But then Leelee got sick.

To be clear, it was not unusual for Leelee, to get sick. From the moment she joined our family, she would get car sick, she would eat things out of the yard and get sick, and she would especially get sick if we fed her off the table. So when Leelee became sick at the lake last May, I thought nothing of it. Just put her on the hardwoods if she starts to throw up, I constantly reminded my family. Cleanup is much easier that way, am I right? But one day of sick stretched into several and I was concerned. We came back to Atlanta and I took her to the vet where they performed test after test after expensive test, none of which showed any

type of problem. She was perfectly healthy. There was nothing wrong and no explanation for her illness. Long, painful story short, less than a week later she died. Just like that, she was gone. And I was a wreck. Talk about an ugly cry. I’d watched her suffer, unable to help her, unable to fix her, and it crushed me. It was, in a word, excruciating. For Leelee, and for me.

Fast-forward a full year, and here’s where the apology comes in. I had no idea that losing a pet was so painful. That’s crazy, right? Definitely. I’ve actually wondered in the past how someone could get so upset over a dog passing away. It’s just an animal, not a person, correct? Incorrect, and as I now know, completely and totally wrong. I know that precious pup is a living, breathing creature that becomes part of your family and your life, and that has intelligence and emotion and can love and be loved. I didn’t before, but I realize all of this now. So, I’m sorry I didn’t understand the importance of a beloved pet, and I’m sorry I didn’t get the pain of losing one. Believe me, I get it now. And to all you dog lovers out there, I get you now. And I love that you love your dogs. And mostly I love that you are brave and optimistic enough to adopt another dog after the former one is gone. I’m not quite there yet, but I’m working on it.

What really happened to Leelee?

Here’s my best I’m-no-veterinarian guess: I believe she swallowed a shard of glass that tasted good to her and that didn’t show on the x-rays or scans, and it perforated her esophagus/trachea. At first she couldn’t eat, then she couldn’t drink, and finally she couldn’t breathe. It was pitiful, brutally so and it still hurts to revisit what she went through. But thankfully, time does heal, at least with the loss of a dog, and after twelve months I feel better. 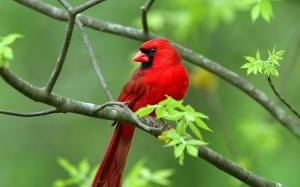 Now, exactly one year later, I sit watching a bright red cardinal outside my window and I have to wonder if the legend is true, the one that says this striking bird represents the spirit of a lost loved one. Who really knows, but if nothing else, it’s a lovely coincidence that makes me smile. So today, I send respect out to all you dog lovers, and I hope you’re enjoying those sand-papery or slobbery licks to the face, because as I now understand, dogs are loved ones too.